There’s not much worse than having sewage back up into your house. HomeKey’s Sewer Scope Inspection can save thousands in damage and repair costs. 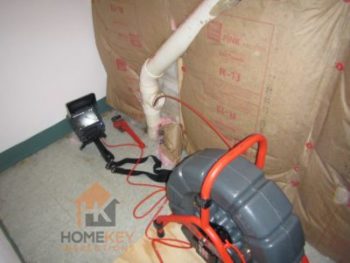 Think a new roof is expensive? Think again. Depending on the complexity, the cost to replace a sewer lateral pipe averages between $10,000-$15,000 but in some instances can reach upwards of $30K+.

Our Sewer Scope inspections are performed by trained Sewer Scope Certified Inspectors (InterNACHI) and can help protect you from purchasing a failed or failing sewer lateral pipe. We put a professional camera, with video recording capabilities, through the sewer lateral pipe to inspect the condition of the pipe at the time of your inspection. The inspector will access the pipe through a clean-out in the house or yard, or possibly from a roof plumbing vent (we do not remove toilets).

Not sure what a Sewer Lateral pipe is? The sewer lateral pipe is the large pipe that connects a property’s drainage system to the public sewer or private septic system. It is responsible for removing the waste from your home in a safe, sanitary way.

Our Sewer Scope video inspection is considered a preliminary inspection intended to flag concerns that need to be further evaluated by a qualified plumbing contractor to determine the severity and action needed from findings.

Real pictures from some of our sewer scope inspections: